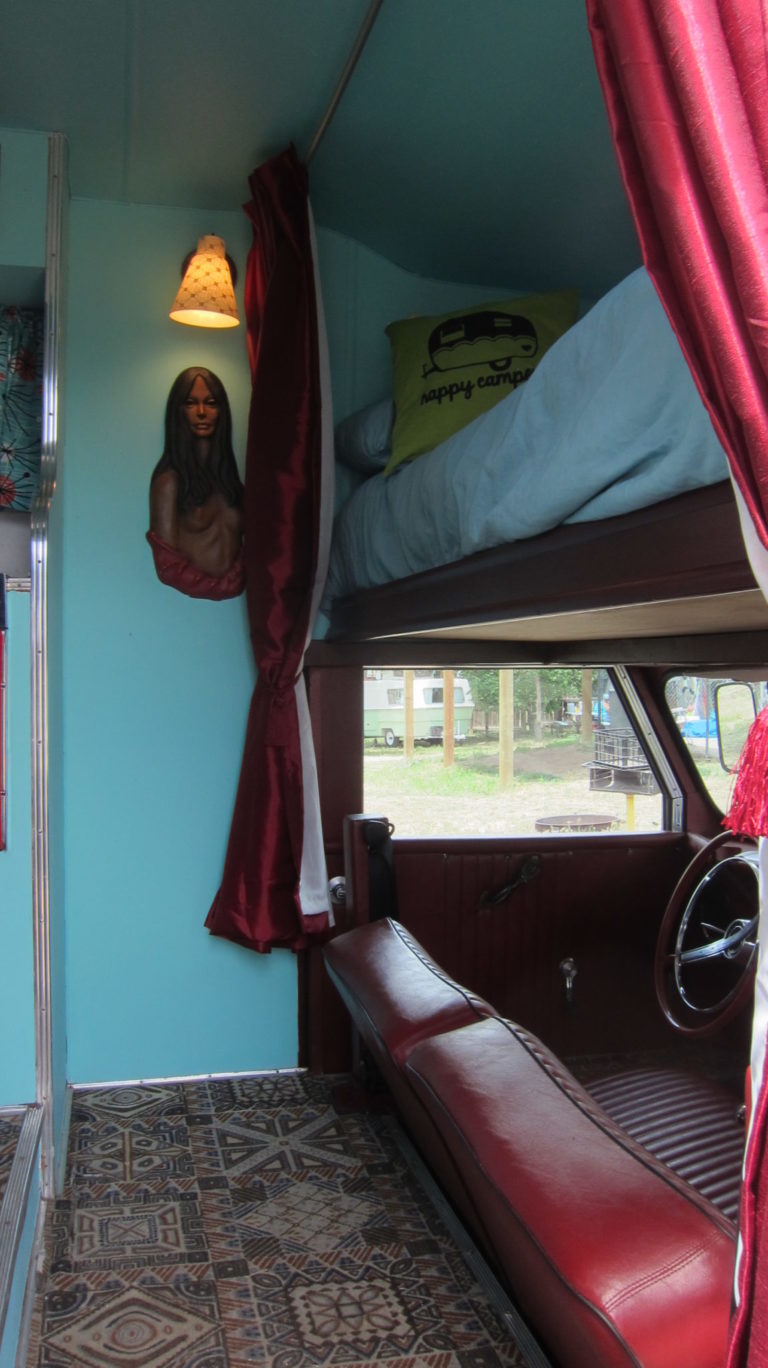 Here she is! Almost finished too. Only waiting to get the dash back. I’ve been looking for the perfect shade of turquoise for almost a year. Found the fabric in about a month.

We went to the Colorado Classic Campout at Starlite Classic Campground last weekend and saw one of the other Great Dales there. You can see it parked right behind us in the picture below.

Here’s a story I found on DenverPost.com about Dale Wasinger. Most of the story is about the Dale Method of gambling, but still a great read and gives you some insight to Dale’s inventiveness and personality.

“Fidelis (Dale) Wasinger, a lively 88 year old gentleman of Denver, Colorado is a self-made millionaire, a successful businessman, inventor, designer and an inveterate gambler. Dale came to Denver from St. Peter, Kansas in 1937 and worked and owned much of the land that is now part of Parker Road, Iliff, Dayton and that area of Denver and has quite a few stories of the Olde Denver during that era. Dale says, I can remember when only two cars and three farm trucks came down Parker Road a day . Dale started one of the first automobile repair shops in Denver and invented and personally hand built one of the first machines that cut steel and cars in half for salvage as well as inventing and personally building farm machinery. Dale personally invented and built the first 52 RV vehicles from automobile parts that he cut with his own machines. These RVs are now considered a collectors item and can be found on the web site : http://www.housecar.com .

Dale also founded the Cunningham Fire Department and hand built the first Cunningham Fire Station which can still be seen on Parker Road. He also served as their Fire Chief and can entertain you for hours with stories of fighting the wheat and corn field fires, all with local volunteers.

Dale made his millions in property and real estate over the years…. a great feat for a man with a grade school education and the inability to read, even today. Talk about stamina, Dale s health and mental capabilities are still as sharp today as any good businessman and entrepreneur in the U.S. and, he will gladly take anyone on in a game of horseshoes, of course with a substantial bet.

That brings us to gambling, one of the world s favorite pastimes. Every day, in virtually every corner of the planet, people place millions of dollars on the line while they hope lady luck will smile on them. Gambling is fun…. If you win more than you lose. Being the inveterate gambler that he is, that s exactly what Dale Wasinger set out to do… to let the odds be with you, especially in making the casino house odds work more in your favor.

Dale loves to win and over the years has applied his remarkable mathematical ingenuity to casino games. Dale was concerned that his fellow players at blackjack, craps and roulette were consistent losers and over a period of time, walking out of the casinos with less money than they started. He began to seriously question the logic and wisdom of currently recommended playing strategies that appear in books, videos and tapes, even if they are endorsed by well known gamblers or the hollywood crowd. After all, the casinos are in a business and their business is to make money. They have to keep those fountains flowing outside. So, for the average gambler, you do not really have much of a chance to win consistently. Or do you ? , asks Dale.

Over the years, Dale applied his ingenuity and logic to his gambling techniques until he was able to shift the winning advantage in favor of the average gambler for blackjack, craps and roulette. (this is not a game plan for poker). Dale s established and honed unique strategy of progressive betting probabilities and a simple but disciplined method for managing your money right at the betting tables lets him win more consistently, most of the time, that is when he sticks to his own method. It s still gambling , reminds Dale. Being the gambler he is, Dale sometimes, well, a lot… gets excited by the gambling mindset and tends to take risks he tells you not to . However, to make up for those losses, Dale eventually settles down and goes back to the DALE METHOD to regain his money… and more. That also excites him.

Although the DALE METHOD can be adapted to the strategies of the professional gambler, Dale has geared the dale method to the average everyday person who likes to run to the casinos on weekends or those who hop on a tour bus with a group of friends for a day trip to gamble … all without being intimidated or having to learn, remember and use all the complicated rules of the games. Dale says, If I leave a legacy when I decide to move on to that big casino in the sky, I want it to be that I showed the average Joe that they can go to a casino, play all night, and still come home with more money than they started with, most every time .

Dale insists, It s fun to win, especially when you do not violate any of the rules of the casinos who can, at their whim, ask you to leave . Dale says that one of the highlights of his life has been, at 88 years old, having a role in the Video / CD-DVD production of let the odds be with you featuring the dale method where he wore a tuxedo for the first time in his life in his cameo appearance at the craps table. Dale says, I actually felt like James Bond . Dale, sitting there talking with you one on one, looking like a loving grandfather, says with all honesty and sincerity, The Dale Method is one sure way to let the odds be with you . I made it for you . Find it at www.thedalemethod.com and look for James Bond .”